Once upon a time there was a little princess whose mother breastfed her to sleep every night until she was seven months old.

The idle queen was so lazy she would sit for hours in a darkened room watching trash TV on an iPad, waiting for the princess to drink herself into a deep sleep, so she could lay her in the cot and creep away.

If the princess ever stirred the queen dashed in and thrust her teet into her rosebud mouth as a quick as a flash, in order to keep peace and quiet reigning throughout the kingdom.

Then one day the queen was invited to a ball to celebrate the wedding of a friend.

It would be the king and queen's first night out together since the princess was born, but just a few weeks before the big day there was an addendum to the invitation which said, 'No babies'.

The queen knew that she must persuade the princess to take a bottle and learn to settle herself to sleep so that the queen mother could babysit, and she could go to the ball.

So the queen trawled the World Wide Web for spells and knowledge and embarked upon her new quest - sleep training.

On the first night bedtime began as normal for the poor, little, unsuspecting princess.

But just as the princess was drifting into The Land Of Nod, the wicked queen popped her into her cot, kissed her good night and vanished from the room.

The precious little princess awoke with a start and wondered where her warm, cosy mummy could possibly have gone and why she was left all alone in the cavernous cot.

Her cherry red lips trembled and tears immediately sprung forth from her big blue eyes, streaming down her face and pooling up in her ears.

The princess wailed and wailed with all her might, sure that this would bring her mother dashing back to her side, as it always had for the whole of her life until now.

Her tears flowed out of her eyes and down her cheeks and filled the cot, until they spilled onto the nursery floor and seeped under the door. Or so it seemed.

But outside the nursery door the cruel queen sat on the stairs listening to the princess' cries and looking at her watch.

After five long minutes that seemed like 100 years, she returned to her daughter. But when the princess realised she wasn't going to pick her up, her screams only grew more hysterical.

The cold-hearted queen administered superficial kisses and pointless pats before turning her back and deserting her little darling once again.

And so it went on for about an hour until eventually the princess gave up and sobbed herself to sleep.

Later on in the dead of night, the silence that echoed around the castle was broken by the sound of a weak and feeble whimper.

The princess had awoken once again, but had clearly lost all faith in her mother and didn't have the strength to call out for her in her usual manner.

The queen lay awake staring at the baby monitor, waiting.

If the cries grew worse she resolved she must go and tend to the princess. But she knew that as soon as the princess set eyes on her, the hysteria would begin all over again.

After letting out a couple more pathetic whines the princess gave up.

The queen checked the baby monitor and could hear breathing.

She felt deep down in her heart she should go and check the princess was tucked up tight, but she didn't want to risk disturbing her, so she remained rooted to her own bed.

In the morning the wicked queen woke up and went into the nursery to see her baby.

The princess had kicked off all her blankets and wriggled her way up to one corner at the top of the cot, where she lay awake, blinking her wide, sorrowful eyes in disbelief.

The queen reached out to touch her tiny toes and they were cold as ice.

She pressed her heartbroken princess to her rock-hard bosom and promised to buy her a new sleeping bag to keep her warm through the night.

The princess suckled forlornly at the milk she had been denied all night and gazed up at her mother with a look of disillusionment.

Eventually she came up for air and broke into a grin. "Dadadada", she chuckled.

The queen hugged her princess to her chest and hoped she had forgiven her for her wicked ways.

But there on the princess' cheek she was sure she could see, one last, tiny tear, frozen like a diamond, shimmering there forever after. 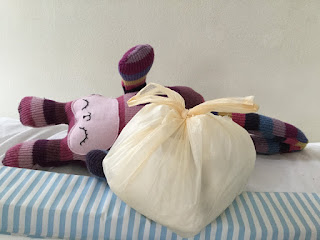